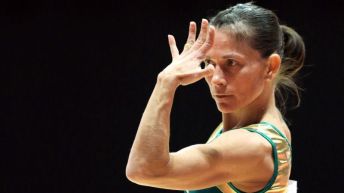 The Olympics is one of our most complicated social ventures, but it’s undeniably the most important international stage for women’s athletics. And in honor of that, I’ve decided to highlight a different female athlete every day over the next two weeks. Hope you enjoy learning about these incredible people as much as I do!

First up is Oksana Chusovitina, a 41-year-old gymnast from Uzbekistan who is competing in her SEVENTH OLYMPICS!!! Her skills in the floor exercise are so legendary that she has a tumbling move named after her. And it’s so difficult that even in this constantly changing and improving sport, Simone Biles (favored to win the all-around and floor golds) will be performing it in her floor routine in Rio. That’s a full 25 years after Chusovitina first performed it in international competition in 1991.

But Chusovitina is no one-trick pony. She’s planning on performing the infamous “Vault of Death” this year, a vault so difficult and dangerous that it’s doubtful that any other female athlete will attempt it at the Games. If she manages to land it, it’s entirely possible that she’ll take home a medal.

However, she knows that her presence itself will be incredibly influential in Rio. “I already have my world medals, my Olympic medals and I really don’t need to leave anything else except for my love for the sport.”

You can learn more about Chusovitina’s incredible journey through this link.