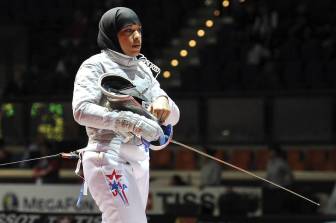 Some of you may have already heard of Muhammad, and we’ll all be hearing a lot more about her soon. As the first US Olympian to wear a hijab, one of the oldest first-time Olympians on Team USA, and an African-American woman in a mostly-white sport, she was worked hard as an ambassador for her culture and her sport of fencing. This has often meant overcoming financial hardships, abject discrimination, and long odds to become an athlete at her sport’s highest level.

The 30-year-old Muhammad competes in women’s saber, fencing’s heftiest and most difficult-to-wield sword. That event wasn’t added to the women’s side until 2004 because those running the sport claimed that it was too dangerous an activity for women to engage in. (Thankfully, I don’t believe there are any recorded cases of someone’s uterus falling out.)

Even for Olympic athletes, Muhammad’s journey has been an improbable one. She didn’t start fencing until middle school. That’s just a few years younger than many elite fencers are going to the Olympics. And because international competition is so expensive but poorly funded, she’s had to pinch every penny and take on extra work just to put herself in a position to qualify for the Olympics.

I once tried fencing in an hour-long lesson, and it completely and utterly kicked my ass. It ain’t just some fancy swordplay like you see in the movies. Can’t wait to watch Ibtihaj Muhammad show us all how it’s done in Rio!

You can learn more about Muhammad’s incredible journey through this link.