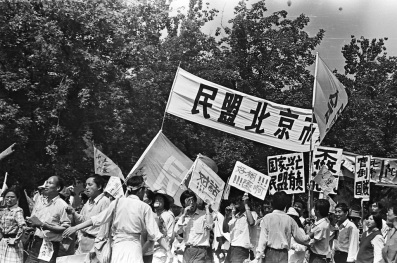 “In darkness dwells a people which knows its annals not.”

So much of what happened at Tiananmen Square in 1989 is still unknown to the Chinese people and the rest of the world as a result of the active information suppression and distortion by the Chinese government.

However, the world has a new source of information about the weeks of protests at Tiananmen. In an amazing and very personal discovery this week, The China Girls blogger Shelley Zhang found an old shoebox of her father’s containing photo negatives. Upon examining them, she couldn’t believe her eyes. They were images of the occupation of Tiananmen Square in 1989 in the weeks before the infamous massacre of unarmed civilians. She gives her full account of the story and shares these incredible photos in her post “Never before seen Tiananmen Square photos found in shoebox.”

A great deal of our collective memory is focused on the massacre of June 4th, along with its iconic images of tanks rolling into the square and the lone man standing resolutely in their path. But that image doesn’t represent the whole story.

This collection of photos is an absolute time machine and shows a side of the movement that we so rarely see. Tourists came to visit. People brought their children. Journalists were allowed to do interviews and take photographs. Thousands marched with banners and flags. Surely some came and watched simply out of curiosity.

Sadly, Shelley’s parents are no longer with us, so it’s likely that the full story behind these photos will always be unclear. However, these photos give us a glimpse into an important chapter of non-violent protest history in the tradition of Thoreau, Gandhi, and King. The protesters, many of whom were so very young, wanted nothing more than the same freedoms that others in the world had: freedom of speech, freedom of the press, the ability to choose their own leaders.

Children in China won’t be able to see these photos, and neither will anyone else there, at least not for a long time. They won’t understand that until the massacre, the demonstrations in Tiananmen Square were a time of great hope for the people there.

The people who protested and died there deserve to be remembered for the hope and faith they had for a free China just as much as, and perhaps more than, the horrors they endured there on June 4th, 1989.

You can find more coverage of the 25th Anniversary of the Tiananmen Square Massacre and other issues facing today’s China by visiting The China Girls, published by sisters Shelley and Ying Zhang.

Photo published with permission from the authors.